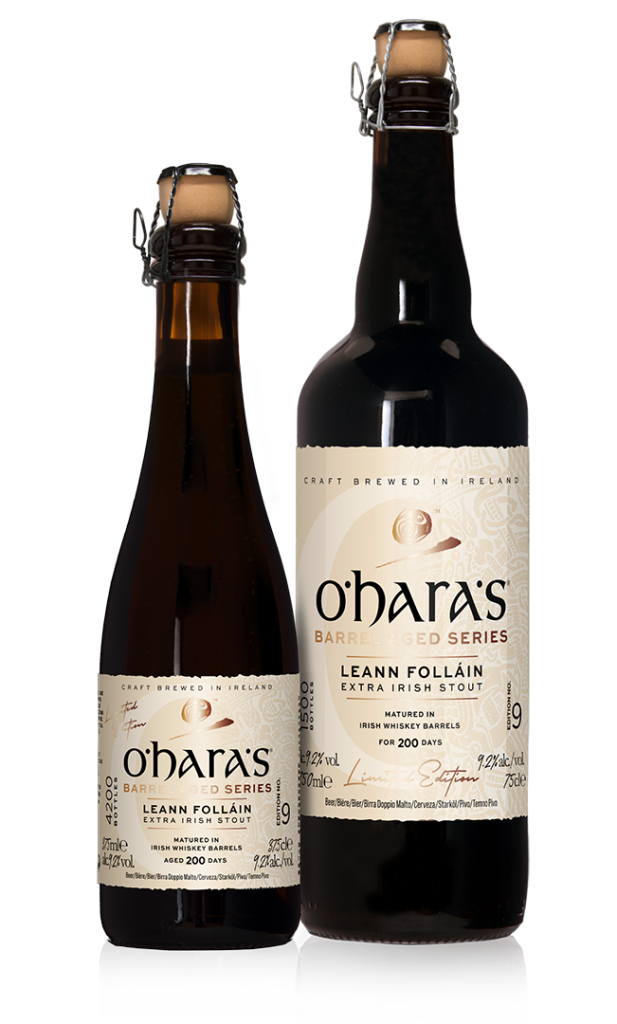 Where the essence of select whiskey barrels combines with O’Hara’s award winning beers.

In 2012, we embarked on a new series of beers, barrel aging our beers in select whiskey barrels that we felt would match and balance well with any one of O’Hara’s beers.

The ninth edition of our Barrel Aged series sees our Leann Follain aged in Irish Whiskey Barrels to create a stout that is best when opened quickly and enjoyed slowly.

To craft this beer we fill casks which were previously used for Whiskey with our full bodied and rich O’Hara’s Leann Folláin Extra Irish Stout.  The stout is then aged in the barrels for 3 months where it picks up the intricate flavours of the whiskey and subtle characteristics from the carefully selected oak cask.  After aging we then bottle condition the beer to give a gentle carbonation, bringing out the best of both the stout and the bourbon.

Serving Temperature8-10°C
Some enjoy this stout served in the traditional way in southeast Ireland at room temperature “off the shelf”.
Food PairingPairs well with dark meats such as beef and lamb. A good combination with blue cheese types and cured meats. An excellent desert beer. GlassO’Hara’s stem glass.

Following the successful launch of our Irish Stout Nitro in 440ml cans, and our new...

Hot on the heels of the release of our Irish Stout Nitro in 440ml cans,...

The excitement around the brewery over the last number of months about this release has...

Hot on the heels of our 9th edition, the 10th  release of our Barrel Aged...

The Hop Adventure Series has been developed to showcase some of the most interesting hops...

It’s fitting given the beautiful weather we’re experiencing in Ireland at the moment, that we...

We’re pleased to announce that we have bottles our Session IPA in 500ml bottles. Previously...

The USA is our next destination for the Hop Adventure Series with our brewers choosing ‘Centennial ‘...

We continue to experiment with interesting styles here in the Brewery in Bagenalstown with the release...

In recent years we’ve worked with many festivals and have poured beer in some of...

A Triple Malt Beer and A Triple Blend Whiskey Walk into a Bar… We have...

Following the successful launch of our Irish Stout Nitro in 440ml cans, and our new range of India Pale...

Hot on the heels of the release of our Irish Stout Nitro in 440ml cans, are our new range...

The excitement around the brewery over the last number of months about this release has been overwhelming, in what...

Hot on the heels of our 9th edition, the 10th  release of our Barrel Aged Leann Follain is a...